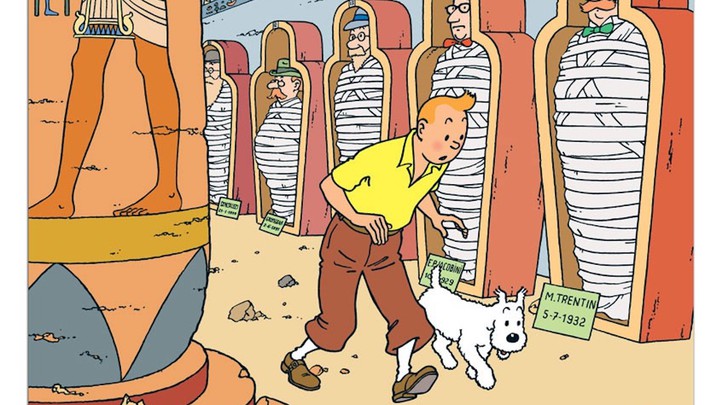 He’s ginger, he’s Belgian, and he is constantly accompanied by a dog. He made his appearance in a Catholic publication. Nothing sounds less Jewish than that. To paraphrase the sage Lenny Bruce, if Asterix is Jewish then Tintin is goyish.

In fact, his creator, Hergé, has been accused of antisemitism, owing to his dodgy depictions of Jews. The Shooting Star, first published in 1941, had a stereotypical Jewish villain, a wealthy industrialist called Blumenstein. One panel depicted two Jews welcoming the end of the world because it meant they didn’t have to pay off their creditors. They were removed from the later editions and Blumenstein was renamed Bohlwinkel from the fictional country of Sao Rico (although, as Harry Thompson points out, this, too, was a Jewish surname). Thus, “[b]y a disastrous accident, Tintin was escorting a German professor and his colleagues to the Arctic to defeat the forces of the international Jewish financial conspiracy.”

Furthermore, Hergé’s early cartoons appeared in Le Petit Vingtieme, a conservative and Catholic publication with pro-Nazi leanings. He was even accused of Nazi collaboration.

Tintin’s characterization of the Congolese, the Japanese, and the Soviet Union have come in for particular criticism, owing to their blatantly racist, imperialistic, and propagandistic depictions.

And women are notable by their almost complete absence.

But is there a secret Jewish history to Tintin?

As has been pointed out elsewhere, Tintin is a blank. His eyes and mouth are mere dots. And he does not even have a family name. Although he is white, male, and European, we know very little else about him. Thus, he becomes a floating signifier, a generic everyman onto which our fantasies can be projected. So, why not Jewishness, too?

As an intrepid reporter, Tintin has traveled all the world and even to the Moon (can he be added to my roster of Jews in Space or Jews on the Moon?). He is the archetypal wanderer, a nomad, faciliated by his bachelor journalistic lifestyle. His constant companion is his dog, Snowy.

Solving crimes, he brings tikkun olam to end his adventures. He is a mensch embodying the values of being an upstanding, decent human being, valuing friendship, loyalty, and honor.

Tintin fights the powerful. He has worked against Imperial Japan and other European dictatorships. King Ottakar’s Sceptre attacks fascism, with one villain named Musstler, a combination of Mussolini and Hitler. The fictional lands of “Borduria” and “Syldavia” have been read as representations of Nazi Germany and its victims respectively. Tintin in the Land of the Soviets is  anti-Soviet propaganda, and totalitarianism is addressed in The Calculus Affair. Even when Tintin befriends the powerful, such as General Alcazar in Tintin and the Picaros, hed so on the condition that the General refrains from reprisal killings.

He befriends the oppressed and champions the underdog, fighting slavers (The Red Sea Sharks), and defending other minorities such as the Roma (The Castafiore Emerald) and the Incas. Hergé attacks lynching in Tintin in America, as well as the policy of driving native Americans onto reservations.

In an excellent article, “Tintin, human rights and politics,” Sarah Joseph examines Tintin’s record. In addition to the above examples, she points out how

Rampant capitalism is satirised in Tintin in America and demonised via the war-mongering multinational oil companies in The Broken Ear and Land of Black Gold. The respective multi-millionaires in Flight 714, Tintin’s main adversary Rastopopoulos and Laszlo Carreidas, compete in a memorable scene over who is the most evil. Alcazar’s rebel Picaros in Tintin and the Picaros are sponsored by the International Banana Company, an ironic nod to the role of multinational fruit exporters in Latin American unrest.

Herge tackled racism in The Blue Lotus, particularly when Tintin and his young friend Chang laugh at the ridiculous racist stereotypes ascribed to Chinese people. The book is also scathing in its representation of arrogant Westerners in the Shanghai International Settlement. Decades later, Herge repeated the dose in his respectful portrayal of Tibetan monks in Tintin in Tibet.

As “Ginger Jews,” points out, there is even a link between Jews and red hair, going as far back as the Bible. So it’s not entirely improbable that, in one early adventure, Tintin is mistaken for a Jew.

This happens in the original version of Land of Black Gold (surely this title provided the inspiration for Asterix’s later adventure) that was called Tintin au Pays de Palestine. It was set in British-occupied Palestine complete with Jewish shop fronts whose signage was in Hebrew. Tintin lands at the port of Haifa where the British police arrest him. He is then captured by the Irgun, who believe him to be of their own agents named “Salomon Goldstein.” By 1971, these contemporary references to the British Mandate and the Irgun were no longer seen as relevant. They  were removed and changed at the request of Hergé’s British publisher, transferring it to the fictional state of Khemed. The various iterations that the story from Tintin in the Land of Palestine to Land of Black Gold went through can be found here.

Louis Blin explains how Land of the Black Gold:

happens in Saudi Arabia, and it’s focused on the Jewish/Palestinian question. He [Hergé] was paying attention to this question long before anyone else was thinking about it, and he even linked it to oil, which wasn’t even a big thing at that time in this region. All the oil was [perceived to be] in Central Asia and Iran […] He didn’t take any sides in the book. There were Jews in it, and there were Arabs in it, but there were no good guys or bad guys. That wasn’t Herge’s way.

Harry Thomson, on the other hand, suggests that Land of the Black Gold “was extremely uncomplimentary about the post-war British regime in Palestine.”

According to Louis Blin,

When the book was sent for English publication, the British publisher insisted that Jews had to be “good guys,” and that Palestine should be substituted with a fictional country. Rather than compromise his political neutrality, Herge opted to undertake a complete rewrite and remove all the Jewish characters from the English translation. Subsequent French editions have also been based on the English version, and only a few copies of the original, French language, first edition remain. This is surely one of the least publicised cases of historical revisionism in the literary world.

Perhaps these palimpsestic Jewish traces remain in the character, leading Jewish director Steven Spielberg to make a 3D computer animated version in 2011, The Adventures of Tintin: The Secret of the Unicorn. Here, Spielberg cast the Jewish actor Gad Elmaleh in the role of Omar Ben Salaad, a character who bears curious resemblance to the director himself. But maybe the Jewishness of Spielberg’s Tintin lies in its wholesomeness. He has whitewashed him, scrubbed him clean of any trace of the antisemitism, racism, colonialism that blighted the comic books, particularly in their early incarnations.